This alternate reality game aims at developing interactions between players in Paris, Shanghai and Montreal. These three cities are combined to form a fourth city called ‘Hupareel’ which is real, virtual, as well as fictional. On this representation of planet earth, we calculated the equidistant point between these three cities: a neutral and theoretical area to superimpose or combine the location data of the 3 cities. Unexpectedly, this area is not located in the middle of the ocean in some neutral space, but on the island of Longyearbyen, an inhabited land now home to the Svalbard Global Seed Vault! This place was considered as a possibility in the genesis of scenarios combining these three territories. Below are the first sketches made in Shanghai to superimpose the maps: a superimposition of the three cities.

In picture 3 is a direct superimposition of the 3 maps of the 3 cities and places that could be potential meeting points. Not easily readable and usable, it has been simplified in this second example with a jigsaw map that constitutes the base for a first game scenario. This second map includes related areas, unknown areas, as well as a prohibited or controlled area. In the third example, the map is more realistic. There are 3 districts associated with the 3 cities (The Old Town of Montreal, the Bund in Shanghai and Bercy in Paris). Finally, the definition of 8 similar places in the 3 districts (train stations, post offices, docks, parks, banks, museums, cafes, hospitals) are used to define common points of interest to allow players to progress. In the last map, the location of these 8 places on each map allows their contours to be redefined. The 3 redesigned districts are then superimposed.

The city of Hupareel is fully privatized: territories, travel and biological functions. One must reach a prohibited controlled area. To do this, one must discover the map of Hupareel. It takes the form of a jigsaw puzzle that must be assembled. To do so, players must physically visit each point of interest in the 3 districts. Then they have access to pathways between the 3 districts that will allow them to reach the Hupareel controlled area. A collaborative device allows players located in the 3 districts (or 2 in the example provided) to assemble the pieces of the puzzle. The competition requires several groups of players located in the 3 (or 2) cities to reconstruct as quickly as possible the map of Hupareel. A simplified scenario is shown here. It is restricted to 2 districts for several pairs of players who must put together the map of Hupareel. Here, the scenarization therefore takes the form of a ‘spatial script.’

From a technical point of view, the map must provide topographic data, the participants’ location and their interactions within the game, which is quite complex. A hybrid topology map built from several connected locations with different characteristics must therefore be displayed. This implies the visualization of a hybrid topological map built from several connected locations and the warping of patches to ensure contiguity between different spaces. This entails the creation of a model of topological data; the preservation of local coherence (connections, districts) at the borders between pieces, and the clustering of graphs; the reconfiguration of graphs relative to player movement, to ensure that there are connections between the areas of the map; as well as different approaches to multi-scale visualization (focus and context, overview and detail). 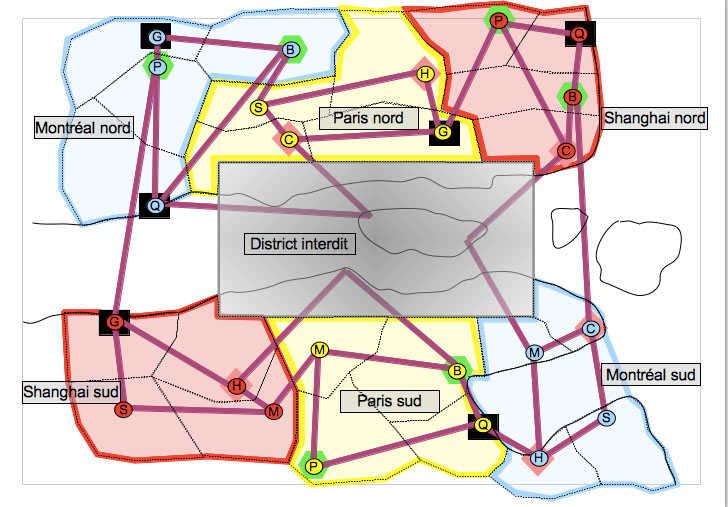 This second phase of the project is about going from concepts, maps and scenarios to tool experimentation and remote testing. These 4 experiments are very different. The first has for its objective to confront two heterogeneous urban spaces through Skype and audiovisual coordination. It combines people, movements and devices. In the second experiment, only audio means are used to provide instructions distantly. In the third experiment, the instructions are also only in audio but with interactions between players. In the fourth experiment, the aim is to associate, or even superimpose, remote movement tracking.

1 – Test “Paris/Montréal”
The main concept is the interconnection between several participants in Montreal and Paris. Through Skype as a back camera on a Smartphone, players can see Paris in Montreal and, conversely, Montreal in Paris. The key issue is then not so much the live image (with a 6 hour time difference), but the guidance and the reciprocity or coordination of movement. Here is a first experiment of interaction between 4 players in Paris and Montreal.

Initially, the aim is to be guided alternately within two heterogeneous spaces. Rather quickly and unexpectedly, alternative audio guidance is no longer needed; the participants simply follow the movements of the devices. From this experiment, I shall single out the unexpected fusion of the participants’ movements during their journey
within the 2 cities.

2 – “Adagio”: protocol audio 1
This second experiment took the form of a first audio protocol delivered simultaneously to two participants located respectively in Paris and Shanghai. In this example, one can once again observe a coordination of movements, but no movement or exploration of the fourth virtual city resulting from the association between the
2 distant cities.

3 – “Trajectories”: protocol audio 2
Finally, without being able to rely on any video documentation, I will try to reproduce the first series of audio instructions issued simultaneously in these 2 cities. This time, the aim is to coordinate and guide the participants’ journey in each of the 2 cities in order to understand the virtual and fictional city of Hupareel. Each instruction must be followed before moving onto the next step. This temporal delay between 2 instructions is not reproduced here and can give the impression of systematic progress, which was not the case in reality.

We can therefore observe here:

In the example below, in 2 distant cities, players follow and compare their GPS tracking. In the first case, the tracks are heterogeneous, in the second case; they match and are superimposed. In the third case, a third player is added… Each player can take and send pictures from his walk. When a distant player reaches the place of the remote shooting, he can see the photo on his smartphone. The mode of interaction is therefore totally different here. The interface is once again visual and the Smartphone screen occupies at least 50% of the participants’ attention. Allocentric and egocentric representations are combined in both locations and develop a complex
dynamic representation in which several scenarios are possible: independence, avoidance and combination of tracks and movements. In the followed link are documented interactions with players in Paris and Rio: